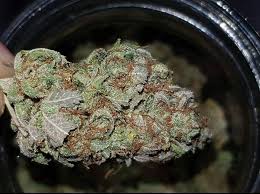 The Dawg family is the most common of Sativa strains in the UK. While there are many that come across from the US, it seems that we have a taste for the cerebral, energetic high and woody, sour flavours of Dawg. While Stardawg is still the firm no.1, there are other phenotypes which have been bred in the UK which are growing in popularity too.

Welcome to the world of Jaffa Dawg. This can only be a British invention as the name is the same as the famed ‘Jaffa Cake’. Much like a lot of the underground UK strains (Monkey Blood being a great example), there isn’t much known about the genetic make-up of the strain or the terpenes that are present within the strain. We can only suggest that the strain is a cross between a variant of Dawg and the Jaffa Cake strain.

What we do know is that Jaffa Dawg does have the same sour, diesel characteristics of Dawg, but with a strangely enjoyable cali fruitiness (mainly a sweet and sour orange rind; not as sweet as Tangerine Dream), which from the Jaffa genes from two other hybrid strains, Mandarine and Cookies. Although strains from the Jaffa family are very popular in the UK, the Jaffa Dawg has been hailed as a ‘thing of beauty’

It’s become somewhat of an exclusive strain in the Jaffa family which means that the price tag you’re expected to pay is quite a bit more than your standard more accessible strains. If you can get your hands on some, we know that it is worth it. It is said that the Jaffa Dawg is a strain that is quite abundant in Yorkshire. We don’t know if that is the origin of the strain but Yorkshire is pumping out some brilliant strains.

What we can say about the effects is that they are strong. This is not a strain for new users as it has a very strong and disorienting head, with a feeling that your body is now in slow motion. With lower levels, the strain gives a really nice and focused relaxing high that is perfect for being social or watching cartoons late into the night.

We are yet to find a company who sell anything with a Jaffa Dawg flavour but we are constantly on the search for new and interesting Vape and concentrate flavours.