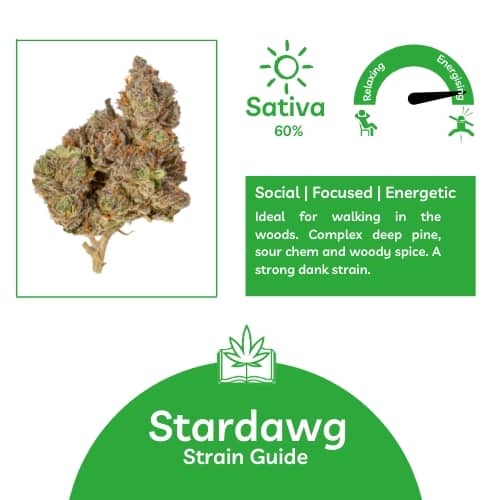 More about the Stardawg Strain

NB: High THC Cannabis is still illegal in the UK – this page is for informational purposes only. Check out our other strain information pages! Learn more about UK Cali Weed here.

The Stardawg strain (sometimes spelled Stardog (the purple colour makes almost no difference) is one of the most well known and popular of high THC strains in the UK (and increasingly Europe & the US). Its roots come from two ChemDawg strains which came from the Chem Dog/ Chem Dawg strains (Chem Dawg 4 & Tres Dawg) from Top Dawg Seeds in the Bay Area, California. The range of ‘Dawg’ strains out there is huge, and almost all of them are winners in their own right (Cookie Dawg, Guava Dawg and Jaffa Dawg come to mind).

While the original Californian strain has been exceedingly popular since the early 90’s, the more modern Purple stardawg strain is one of the most well known of the modern family in the UK as it is cultivated in colder climates. The strains name comes from the thick layer of THC trichomes which cover the strain’s buds which sparkle like stars.

We just tried an insanely good Stardawg CBD concentrate vape – Check it out!

Unlike the classic Stardawg strain, the Purple stardawg can have either a light tint of purple, or almost completely purple leaves. This is caused by exposure to the cold during cultivation and a predisposition to the strain turning purple (most likely why it is more common in the UK, as the climate is colder here). The brilliant purple strain has a contrast of a frosty purple bud, and orange hairs.
The herb should almost feel heavy with resin, and will have a very thick shiny layering of trichomes which sparkle (hence the name). The sticky surface tells you that this is going to be a ride and a half.

The classic Stardawg in the UK enjoys a complex, rounded and actually very enjoyable aroma which keeps you coming back. Users report experiencing something different every-time. This could be down to the who host of phenotypes available, but could equally be the complexity of the flavours.

Users can expect to taste all kinds of wonderful funky notes of pine, spice, wood and nuanced sour dankness (chem & fuel). Much like the famous OG Kush, this strain is known for its thick pungent dank peppery funk that hangs about like a good friend. Some say there are citrus notes on the exhale, while others say it is pure chem! The main Terpene content is made up of Caryophyllene, Myrcene & Limonene.

For new-comers, the strain take some getting used to, but for those who love dank chem and potent, strong flavours like Cheese, then you’ll adore this strain.

Believe it or not, you can actually get Stardawg concentrates and vape pen cartridges which taste uncanny. There aren’t many but they are way more common than a few years ago.

As a sativa dominant hybrid you users may find that this strain is ideal for sitting outdoors by a campfire or hiking into the wilderness.

The strain itself is a sativa dominant but experiences seem to differ from user to user- while some find Stardawg an energetic, focused and social experience, others find this strain more laid back with a clear head. Most people seem to experience a nice blend of the two- with an energised buzzy head and a body low which melts away physical tension.

Many users report this strain to be particularly strong, and should be avoided by complete newcomers. Its potency may bring rise to paranoia and anxiety – or read eyes and the muchies at the very least.

For many, the UK Purple phenotype in the name may suggest that this will be a strain that will put you to sleep, but that isn’t the case (If you want a Chemdawg indica, check out Cookie Dawg). While some purple strains (such as Granddaddy purple) are strong and sleepy indicas, there are some purple strains that are more uplifiting, Like the Purple Stardawg. The colour comes from the cultivation in a colder climate. The image above is a normal stardawg due to the fact that the image perfect captures the sparkling THC crystals- just use your imagination and you can see a tinge of purple.