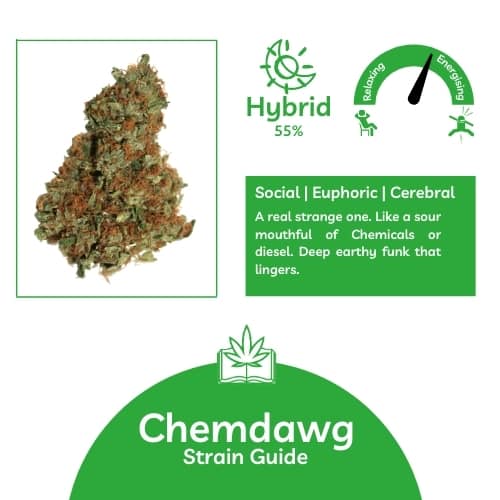 The legend is strong with Chemdawg it seems. There are a few origin tails about this strain but we know for a fact that it is extremely popular and has been crossed to produce the even more potent Stardawg. The Chemdawg strain is not also popular with smokers but is a popular strain to replicate in vape oils and cannabis concentrates.

The thought is that the strain was crossed fro Thai and Nepalese sativa landrace strains in the US. A few breeders have claimed rights to the strain but none have been solidly accredited with its creation. Others say that growers at a Grateful Dead concert exchanged seeds, and others say its origins are from Bog Bud. Quite the complicated family history!

No matter where the strain comes from, Chemdawg has become very well known for its high energy high and interesting flavours. The THC content of Chemdawg is fairly high too being tested at 15% and 20%. That’s up there with the strongest of Kush or Glue (GG4).

Unlike those stains, Chemdawg’s buds are said to be fairly loose and wavey, rather than a tight-packed nug. The hybrid has Sativa linage which may explain its tall and wavy appearance which is particularly hard to break up by hand. It may be best to use a grinder to refine the bud down before using a roll-up or a pipe. The buds are quite sticky. The bug is light green, burning orange pistils with a thick layer of sticky trichomes which gives the big a shiny sugar glaze.

The aroma of the strain is partly very similar to that of Diesel (which explains the ‘chem’ part of the name) and has a very pungent earthy, piney musk which is very pungent and lingers. When the flowers are cured, the smoke is smooth yet sour chemical quality on the exhales, like ammonia. It does sound awful but you’ll be surprised.

Like most Sativa strain, Chemdawg can be felt right away. There will be an increased sense of your surroundings, where sounds become louder, things becoming brighter and everything in sharp. Although for many this may become disorientating, the head high slowly becomes more productive. Your thoughts may meander from one to another in a long stream of cerebral activity. If you’re just about to get into a deep and philosophical conversation, about to play an instrument or paint, the Chemdawg experience will lend itself perfectly.

While the majority of the effects of Chemdawg are heady, there is also a sense of physical relaxation which washes over your body to take the edge off the strong head-high. Many who take Chemdawg find that there is a lessening of symptoms caused by stress, anxiety, and depression for some users, while others may experience less pain. Due to the strong-head high, and high THC concentration, there is a tendency that less experienced users may find themself in a spiral of repetitive thoughts which can deepen into a sense of extreme anxiety and paranoia. Like all cannabis, the Chemdawg strain should be taken with caution.

Thankfully, cannabis seeds are completely legal in the UK so you can actually grab some Chemdawg seeds from a number of seed banks across the country. It is, however, a criminal offence to cultivate the seeds so be sure to keep them in a safe place until it is legal to do so.