Cannabinoids have been inhaled for thousands of years. As technology has developed, we have found that there are better, more enjoyable, ways to intake cannabis via our lungs.

If we look at the way things are going, it is clear that 2021 is the year of the weed pen. The cannabis vape pen has become the number one most popular means to consume cannabinoids in the UK – partly because they are enjoyable, secondly because they are potent.

With the highest rate of bioavailability, a CBD vape pen is particularly great to be used on the move and taken as and when it is needed. The targeted dose may not last quite as long as a CBD oil or paste, but you can puff away on your vape pen all day long.

One of the biggest issues that CBD vape oil has is the temperature that it is to be burned. Most often, CBD vape oils need to be vaped at a very low temperature so that you can get the most out of the formula and cannabinoids. This can be difficult to control on a big rig so it is much better to use a smaller, specially designed vape pen which provides a perfectly soothing puff of cannabinoids when you need it. What’s better is that these pens are as discrete or obvious as you want them to be. 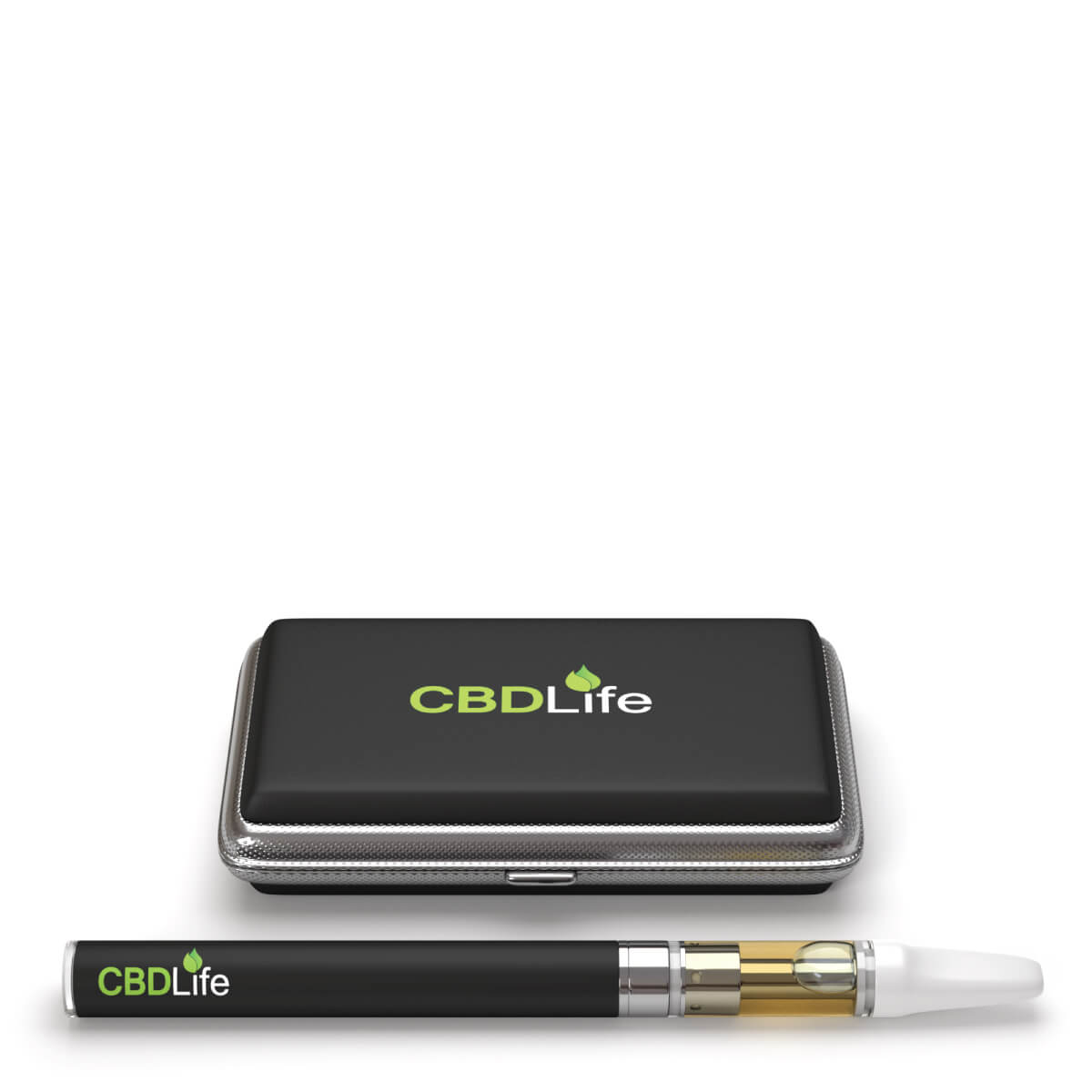 CBDlife are one of the most well known CBD vape producer in the UK, and is most likely the products that even the most established brands use. They are not only a trusted brand themselves, but a manufacturer of quality vape products.

While there are others with funkier branding, CBDlife focus on what it is in the vape pen more than anything. They offer a range of broad-spectrum vape pen cartridges at a great price point – they also offer a range of CBD concentrates to enjoy!

You can get a range of terpene infused flavours at a reasonable price: from Blue Dream and Tangerine Dream  to Granddaddy Purple and more. 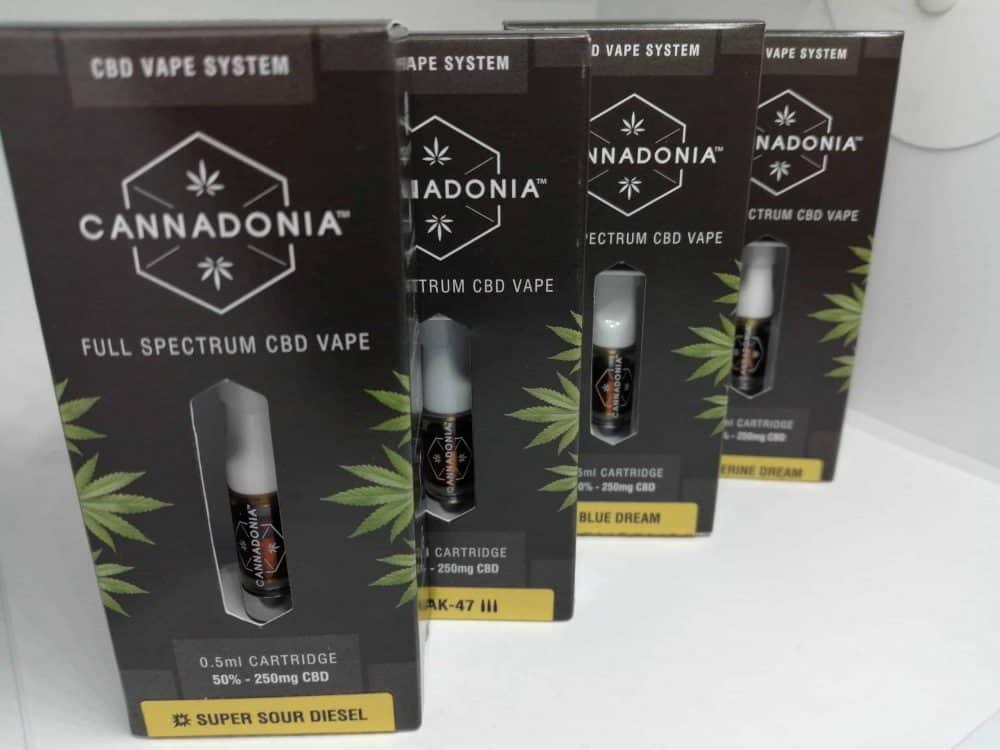 The most interesting vape pens that we can come across are from a company in Scotland, called Cannadonia. They provide a range of cannabis flavoured full-spectrum CBD vape pens which can be purchased on their own, or as part of a set. The pens are naturally infused with terpenes which gives them their unique flavour profiles: Tangerine Dream, AK47, Blue Dream and Sour Diesel. Each pod comes with 250mls of full-spectrum CBD (which is uncommon for vape pens in 2020) that really goes give you a wonderful light feeling. Even the smallest draw on the pen can deliver amazing results.

What is really amazing is that you can feel different depending on which terpene profile you choose. We have tried the Blue Dream and Tangerine Dream and each tastes great but have different uplifting effects.

All of the Cannadonia vape oils are produced in the UK. 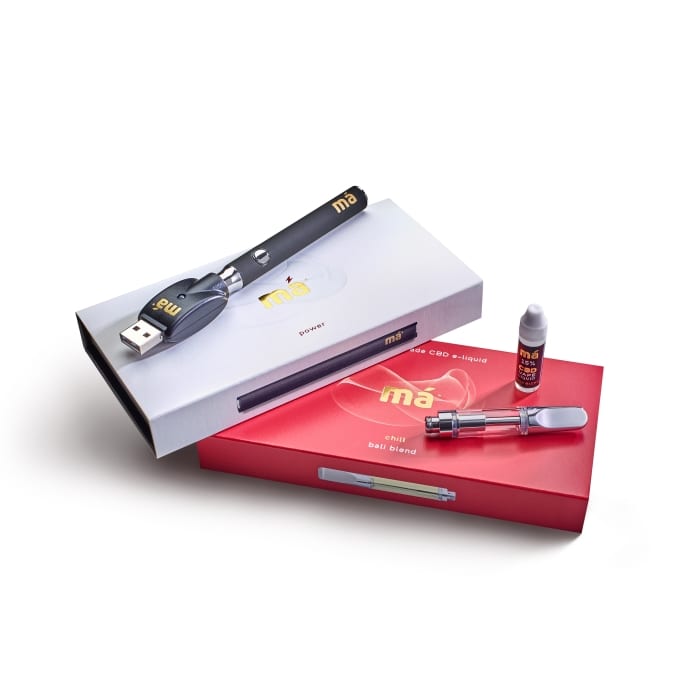 Ma CBD is one of the biggest producers of CBD vape products in the UK. They have made quite a splash with their wide range of cannabis flavoured vape pens,  but also with their range of vape oils. They are certainly up there as one of the best CBD vape pen producers in the UK – on the size of the company alone.

While the CBD vape pen is not the main product they sell, Ma CBD is very well known for the quality of the liquid that they sell. The Ma super strength CBD oil is sold as having 400% more cannabinoids than many of their competitors and use a cannabis oil distillate, rather than isolated CBD. They also claim to have a THC Vape oil but we think this is a clever marketing trick, rather than a genuine THC rich vape oil. Ma produces their vape oils here in the UK too. Most of the lab reports that can be found on the website show that the liquid is broad-spectrum, rather than full spectrum.

While most vape pens may use e-liquids which are diluted in propane glycol or vegetable glycerin, Nature & Bloom sell one of the best CBD vape pens in the UK and is different.

It contains a CBD e-liquid with high viscosity broad-spectrum CBD distillate which is naturally rich in natural terpenes. Much like the best in the market, the CBD e-liquid is the star of the show. Nature and Bloom also use the Ccell M3 which is said to be one of the leading CBD vape pen manufactures from the USA. The CCell products are specifically designed to vape cannabis concentrates, rather than any old vape oil. It is clear that these pens are the top of the tree in terms of technology. Fantastic if you are looking for a citrus burst and CBD without THC.

The only gripe we have with this particular selection in our best CBD vape pen list is that there are not more flavours. We like the idea of having lots to choose from, and particularly when other bioactives in the vape have their effect. More range would be nice. 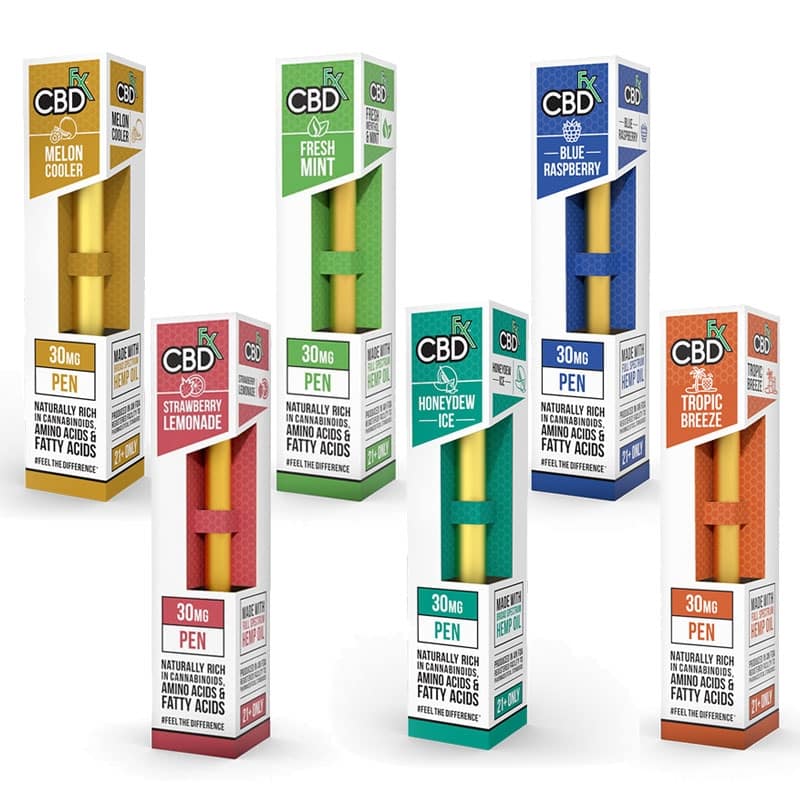 A little lower on the list than you may expect is the CBDfx vape pen. The only reason that CBDfx is not higher is their choice of flavouring. Every other Vape product we have included in this list contain natural flavouring using plant terpenes for a good reason. These compounds are also active and can have their own benefits. The Vape Pen flavours that CBDfx use are seemingly more catered to those who do not like cannabis. They include strawberry, Mint and Honeydew. We are really strongly behind natural cannabis flavourings when it comes to Cannabinoid vape products which explain CBDfx being lower on the list.

A second to that would be the fact that the pens seem to use an Isolated CBD formula for their pens. Once again, the best CBD vape pens are full-spectrum and contain a small amount of THC. If you were to ask us, we’d say to potentially avoid any isolate CBD product where possible.

The Goods offer a great Vape Pen that can hold cannabinoid distillate. They are slick, cool and easy to use. There are mixed reviews on this particular pen as some do not like the flavour of the oils used. We certainly cant mark The Goods CBD vape pen for that! We actually quite enjoyed the flavour.

You can purchase the goods from a couple of places, but the best place to get them is from HempElf. They stock a few other vape products too.

If you’re still in search of the best CBD vape oil in the UK, then we will be updating this post regularly with new additions. If you have any suggestions then get in touch and we will update everything for you.

Where to buy cannabis/marijuana seeds