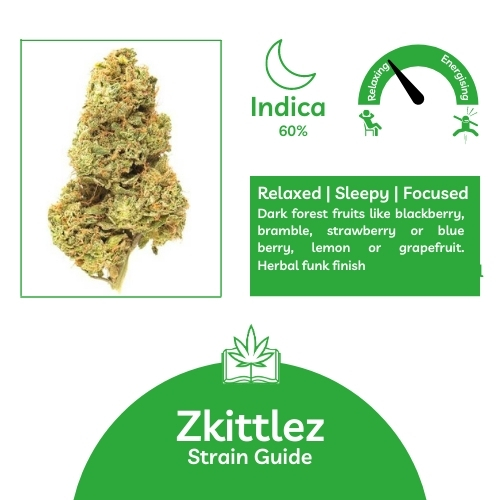 More about the Zkittlez Strain

The Zkittlez strain (and Blue Zkittlez) is one of our favourites. The tag-line, much like the sweets the strain gets is name from is: taste the ‘taste the rainbow’. The only difference is that you may see that rainbow too (we stole that from somewhere).

Of course, we tried a CBD version of the strain 🙃). Zkittlez (or Skittles Weed for those who do not know its true name) is an indica hybrid of Grape Ape (some say this is identical to Granddaddy Purple), Grapefruit and another secret strain. The Zkittlez cannabis strain is bred by 3rd Gen Family and Terp Hogz who managed to place this strain as number one at the 2016 Emerald Cup, number one indica at the 2015 Cannabis Cups hosted in Michigan and San Francisco. It also gave way for other award winning strains like Z Cube and Wonderbrett’s OZK strain.

The way that the strain looks depends on the Phenotype and the cultivation of the buds. There are some which look much like the name suggests, the buds are a bright array of colours including orange, greens, purples and blues. Others have a more subtle appearance but they still certainly stands out among the finest looking strains there are.

The linage of the strain is that of an Indica, and the structure certainly represents the classic big density that is traditional for indica strains. The buds tend to cluster into lumps but still hold a coned structure which is nice to break apart or put into a grinder.

The aroma and flavour of Zkittlez can really take you by surprise – it is fruity, tropical and sweet which matches it’s focused, happy and relaxing effects. Sometimes it is hard to describe this strains flavour and aroma; some pick our dark forrest fruits like blackberry, bramble, strawberry or blue berry, with a nice citrus finish of lemon or grapefruit; there is also an element of herbal funk which nicely brings out the sweetness of the strain.

There aren’t many other strains that have such an easily identifiable aroma and flavour. You can get some really good cannabis / CBD pre-rolls , crumbles or vapes with flavours very close to the real thing.

If you’re a terp hunter then you will love this strain for sure as the flavour is really where it shines. There are plenty of variatons of the Zkittlez strain that you may encounter: including orange, watermelon skittles, gorilla zkittlez, forbidden zkittlez and even garlic zkittlez (which personally, we will be avoiding if we can).

The effects of Skittles Weed comes on quick and is said to be very heady-psychedelic. Colours may seem brighter, sounds louder and time seems to become slower. Many have said that this strain feels a lot stronger than it actually is, down to its heavy yet active head-high. The head-high brings about focus and creativity which is ideal for the ordinary tasks of life. After not too long, the body sets in with a relaxing dip in energy which won’t glue you anywhere, but take whatever energy the head-high brought. The strain is suggested for late afternoon, or early evening.

Zkittlez is a very strong strain and the feelings can be quite intense so if you’re enjoying the flavours too much it is easy to overdo it- which is why a nice vape is a good alternative if you have something to do.

The skittles strain is still very illegal in the UK due to its high THC content, but you can purchase a CBD product that uses the same terpene profile. Whether you like CBD concentrates or a nice CBD vape cartridge you can enjoy the flavours of the strain while getting a nice dose of CBD. You can also buy the strains seeds easily from seed banks (Like this one). While it is still legal to buy zkittlez seeds it is illegal to cultivate or grow the plant. So keep that in mind when you buy seeds.

Variations of the Skittles Strain