CBD for anxiety - does it work?

CBD has seemingly been hailed as a remedy for all ailments. It is easy to find claims about CBD improving everything from digestion, immune defence, sex, and mental health (particularly anxiety).

It is understandable why many people are becoming very dubious about the real benefits of CBD and what symptoms it actually does help; to be very honest, a lot of the things you may read are unsubstantiated 'weed-feed' rubbish that is misinformed or outright fabricated.

Yet, time after time, posts about CBD for anxiety are one of the few which has some kind of science to back it up. There are millions of examples of anecdotal benefits but what is the science behind it? Does CBD oil for anxiety actually work and how?

If you're interested in purchasing CBD for anxiety you should consider our recommendations for CBD oils, CBD Gummies and CBD Vapes. All are particularly good at helping with anxiety.

How CBD interacts with the Endocannabinoid System

Everyone has an Endocannabinoid system, every single human and almost every other mammal. It was named after the plant which lead to its discovery: Cannabis (scientists tried to understand why the Cannabis plant made humans high). The ECS is part of what keeps your body functioning and alive. This system acts as a sensory board to detect and rectify changes in an internal equilibrium which scientists call Homeostasis. Our bodies work on balance, so if there is an imbalance in our workings, then it may result in a health issue.

The ECS has been found to help to defend you from harmful invaders (like Bacteria/ Viruses) but it helps to regulate normal body function, chemical production and healthy cell growth (and helps to prevent unhealthy cell growth, like unhealthy growths/tumours). This system is operated by Cannabinoids and some other chemicals (like terpenes), including THC & CBD.

For this reason, having a healthy ECS is a crucial aspect of good mental health. This is why stimulating the ESC with CBD products can help to positively impact anxiety.

For some people, depression and anxiety is chronic and can be caused by a biological imbalance in chemical production in the brain. So you produce less 'happy stuff' or too much of it. Which causes you to medically struggle to control your mood.

The ECS can be really fundamental when regulating chemical production in the brain and ensuring healthy cognitive function. Cannabinoids can be produced naturally in your body by activities like standing in the sun - have you ever noticed that you always feel better in the sun? Standing in the sun starts the process of your body producing cannabinoids in the skin.

Some cannabinoids, your body cannot produce. You can instead take on cannabinoids which are derived from a plant (phytocannabinoids). You can get these from foods such as Flax Seeds, Olives and the Cannabis family.

You have previously heard a bottle of CBD being referred to as a 'little vile of sunshine' because it can deliver a dose of healthy and happy phytocannabinoids.

If you look at the science behind how CBD oil for anxiety and depression works, you will see that CBD actually does help, prevent or cure mental health conditions such as depression and anxiety. CBD works with the Endocannabinoid system to regulate the production of chemicals in your brain.

CBD is also an anxiolytic which means that it helps to calm you down and relax you - this is why it is said to also improve blood pressure. It is also said to improve your sleep pattern- lack of sleep is both a symptom of anxiety and can also aggravate/cause it.

While there is little hard evidence of the benefits of CBD oil for anxiety in humans, the internet is awash with people who say that they feel calmer, more relaxed and better generally once they have their CBD. It may be important to note that it may be important to have a tiny amount of THC in your oil to.

Supporting your ECS has been associated with helping your sleeping pattern and ensuring that you have a deeper, more satisfying and refreshing sleep. The importance of sleep to mental health and cognitive function is huge! A lack of sleep can significantly impact your brain power and can induce anxiety or depression which can significantly impact your quality of life.

To add to that, stress and anxiety are notorious for disrupting the quality of your sleep. So if you suffer from anxiety, you may not be able to sleep well which in turn can make your mental health worse. You can easily find yourself spinning in an endless vicious circle. Often many turn to self-medication which is certainly not the answer.

The ECS can be stimulated to ensure that your bodies sleeping pattern is regulated and have a calming effect on your mind. Activating the ECS could be what helps you break the cycle but it should not be considered as a quick fix.

What is the best CBD for anxiety?

CBD Vape: By far the best CBD product for anxiety is the vape. It is the quickest acting and most effective when you need it most. When you feel anxious, a few draws on a CBD vape is more than enough to help you feel at ease again.

CBD Oil: Oils are much better for your general well-being. They help you feel generally calmer, help your sleep and can reduces the other causes of stress and anxiety. They do not work quickly so can be combined with a vape.

CBD Gummies: Is there anything more comforting than something sweet. When you're feeling anxious, take a moment to have a handful of CBD gummies. They taste good and some have lots of CBD in them.

This is a very common misconception- a lot of people have anxiety and smoke a lot of cannabis to block out the symptoms. In a lot of cases it is the cannabis that is causing, or making the anxiety worse. This is due to the concentration of THC, which is infamous for making you 'high'. Although this cannabinoid gives you an overwhelming sense of euphoria, it works in exactly the opposite way to CBD. THC over stimulates the brain and causes you to become even more anxious - this is why you may experience paranoia or hear voices.

Because CBD and THC regulate each other, they are fantastic if used in the right concentrations. For instance, CBD may make you sleepy (THC will brighten you back up), and CBD can bring you back down if you are high and regulate the paranoid or adverse symptoms which comes with an overdose of THC.

If you are looking to reduce the symptoms of anxiety it is said that vaping some CBD flower can help. It will not get you high, it is legal in the UK and when vaped, you get a big dose of CBD. This can supercharge your ECS- from personal experience, this can make you feel calmer, lighter and will help you sleep. 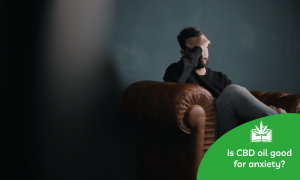 We cannot definitively say that if you have anxiety, this is the wonder cure. The brain is a very complex organ and there are lots of external and behavioral factors which may be at play. It is always best to speak to a doctor.