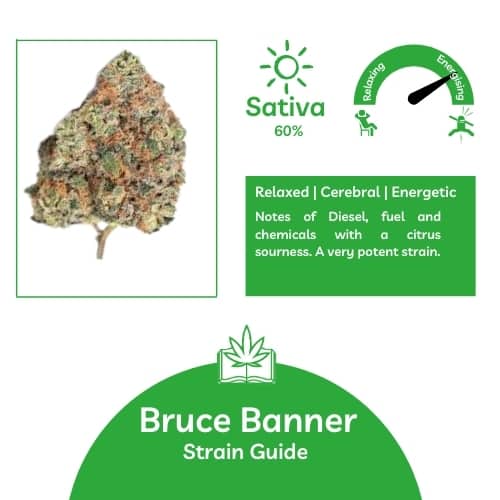 More About The Bruce Banner Strain

NB: High THC Cannabis is still illegal in the UK – this page is for informational purposes only.

If you’re a fan of marvel, you may be a fan of the extremely popular Bruce Banner Weed strain. You may ask, why is it called Bruce Banner? With a THC content of 22%-30% then you may just be shaking hands with the hulk. The genetics of the Bruce Banner strain are from OG Kush and Strawberry Diesel which explains its fuel-y aroma and underlying sweetness.
There are more than a few phenotypes of the Bruce Banner Strain. The most notable is #3 which was ranked first in the Denver Cannabis cup and was the strongest strain ever tested for the High Times Cups. It is partly why it gained so much exposure in back in 2009.

This strain isn’t so well known for its flavour or aroma. While holding the strain in your hands, you get a herbal spice which is very similar to its OG parentage. The overwhelming flavours are fuel, diesel and sour spice with a citrus sweetness which comes through very lightly. It is a pleasant flavour but not award winning like it’s high.

This 60% Sativa dominant Hybrid is made popular by its great balance between the effects of Sativa and Indica. The heavy stone eventually lifts to enduce a creative and euphoric buzz. The effects are particularly heady but also spread throughout the body to give a great indica relaxation. These effects make the Bruce banner a great strain for the daytime.

The strains have high levels of THC (between 22% – 30%) and very low levels of CBD which means that this strain is particularly potent. You should be aware that there are potential negitive side effects which come with high THC strains- the list of noted effects are as below: