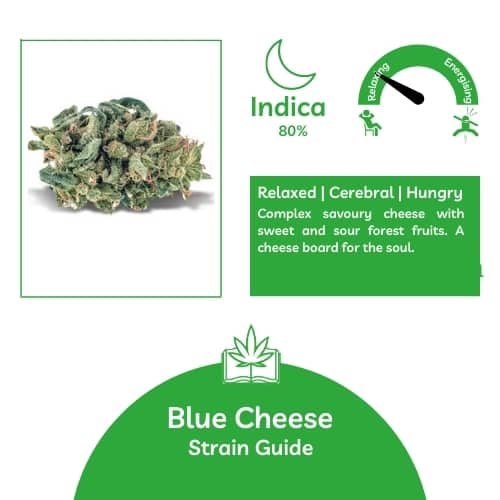 When you try some Blue Cheese Weed, you’ll know exactly why it is named this way. There is a ‘huh’ moment where the funk of Blue Cheese which is followed by the subtle tarty sweetness of the fruit. It is like a cheese board in a bud. How is this possible!? Then the high kicks in a who the hell cares any more?!

The Blue Cheese strain is a dominant Indica which has been produced by crossing the very famous Blueberry and the UK Cheese (Skunk). The strain has a very unique creamy flavour which is very close to Cheese. Although it’s not quite cheese, the exhale is unmistakable. Although the Blue Cheese has been produced by Breeder Big Buddha Seeds, you can find cheese strains all over the place (even from Barney’s Farm).

The very sticky resin-coated buds are made up of tightly packed leaves which of olive green with dark, rusty orange hairs. The covering of white trichomes gives the cheese its milky shine and sticky texture.

Although the strain to smell fresh is not too far away from its parent, Blueberry, there is a very slight funk behind the fruitiness. Some have described the funks as rotten vegetables which don’t sound nice at all. This is a well-known trait of the Cheese family which has become weirdly popular, particularly in the UK. The pungent aroma is what you get first. The smoke is not harsh but with a big enough hit, you may find yourself coughing, your eyes watering and your palate being tickled. The first hit of funk is cut with a clear fruity blueberry on the exhale which clears into a dank hash. To say that this strain has a strange flavour is an understatement. It is quite enjoyable though.

The Blue Cheese strain creeps up on you as you don’t feel the strain hitting you right away. There is no headrush, or dizziness, just a gentle relaxation that slowly washes over your body like warm water. While with higher doses there is a possibility of couchlock, the cheese strain finds an ideal balance of de-stressed and euphoric. Once the body high has taken hold, you may notice the sativa characteristics kicking in with creative, recurring thoughts and an active imagination. The head high is thankfully clear and focused which is unlike many other strong indicas. It is safe to say that those who smoke the strain do not do it to enjoy the flavours, but the effects.

The effects make this strain ideal for helping you fall asleep, getting away from stress and anxiety, but also some aches and pains. The strain also is well known for giving you the munchies so make sure to have some snacks on hand.

Blue Cheese Seeds & Where to Buy in the UK

At the moment, Blue Cheese is banned in the UK as it is a high THC strain of cannabis. As far as we can see too, the flavours of the strain are not popular enough to be included within the vape industry, or the CBD flower world. It is safe to say that a lot of people would think you’re trying to poison them.

If you do love this strain, you can find Blue Cheese seeds (or other Cheese strains) directly from source, or other seed banks in the UK. It should be pointed out that cannabis seeds are completely legal, however, it is still an offence to cultivate/grow the plant from the seeds. It is best to keep the seeds as an heirloom for when the cannabis laws in the UK are a little more fit for purpose.